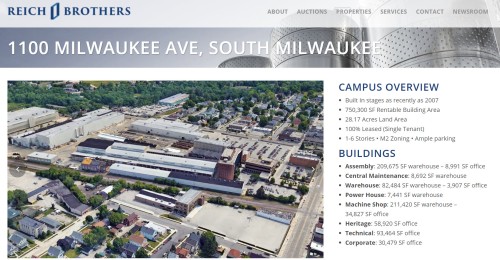 “Keep the lights on. We’re coming in behind you.”

I’ve been saying that for a while now in regards to the former Bucyrus campus downtown – 28 acres with more than 750,000 square feet of buildings being left vacant with the completion of Caterpillar’s move to the north side of Rawson Avenue.

And what I mean by that is simple: Unlike similar facilities you see across the region, state and country – where idled industrial facilities sit in decay for years, sometimes decades, in hopes of redevelopment, often before meeting their demise by wrecking ball – this campus is different. South Milwaukee is different.

We are reinventing ourselves, and it starts at 1100 Milwaukee Ave.

There is already positive momentum. It started with work the city did in the past year securing grant funding from the Bucyrus Foundation for, among other things, campus planning; applying for and obtaining Economic Opportunity Zone status from the federal government; and, perhaps most significantly, creating a new tax incremental district to encompass the now-vacant campus and other high-profile parcels downtown.

Then Reich Brothers closed on its sale a little over three months ago.

Since then, the pace of progress has quickened, as the new owners quickly began moving to buy out Caterpillar’s lease for the south-of-Rawson property (to fully enable the site for development) and take a deep dive, with an engineer’s eye, into subdividing the campus. That work continues, and there was more progress this week – the reason why I am writing this post today.

On Tuesday, the South Milwaukee City Council voted 7-0 to enter into a master planning agreement with Reich Brothers, contributing $40,000 of the Bucyrus Foundation grant money to, as the resolution states, “pay for a party in 2018 to subdivide and reconfigure parcels, design access points and road layouts and connect to the city’s grid for maximum use and visitor benefit.” More specifically, Reich Brothers wants to hire a consultant to study and report on existing site conditions, and offer cost estimates for necessary repairs. Importantly, the study will provide “initial plans for subdivision of the site that will provide improved circulation and public access to existing facilities.”

In other words, this is the first step toward a new day for this campus, our downtown and our city – redevelopment of a site that for more than 100 years was a city unto itself, into one that, while different, will hopefully be just as central to South Milwaukee’s growth and prosperity as it was in 1892.

What will that look like exactly? That’s what the master planning effort is for, for which we’ll have a seat at the table the whole time, per the agreement we signed.

Have a plan, work the plan, together. There is no wishing, hoping and waiting here, as we’ve seen in so many other cities. The time is now. Let’s go!

One response to “1100 Milwaukee: First Steps to New Life”